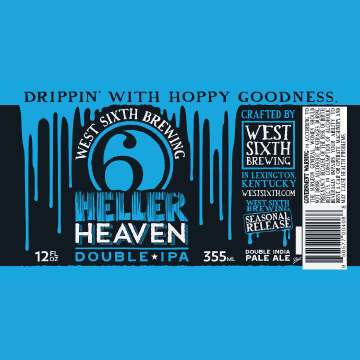 West Sixth Heller Heaven Double IPA is a long time fan-favorite in their taproom, and one of their first ever “seasonals” when they opened the doors, is a beautifully balanced Double IPA. Simcoe and Amarillo hops play well in a malt bill similar to their West Sixth IPA, bringing balance, bitterness, a touch of sweetness, and a juicy citrus and floral hop profile.

The beer is named after Lexington artist Sarah Heller, who was one of the initial artists present in the Bread Box Studio Artists space next to West Sixth Brewing. She was instrumental in the launching of the brewery, and designed and built a giant mural on the side of the brewery made from recycled building and bicycle parts and dripping paint.

The label stands out, designed once again by Brian Turner of Cricket Press. In inspiration of Sarah Heller, the can’s “paint drips” along the side are a characteristic of her work, with the bold black and blue colors representing this beer that packs a punch.

West Sixth Heller Heaven Double IPA will be available throughout their distribution area in cans beginning in June each year.